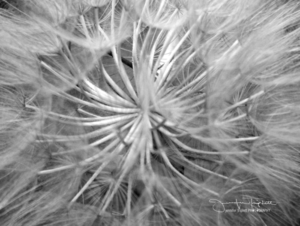 Originally not a very exciting photograph, I decided to see if there was any creative hope to make this viewer-worthy. Who can’t resist blowing the dandelion seeds? My son does it all the time. But I never really paid much attention to the dandelion. It’s a weed. But after working with this photo, I realized how intricate and soft the dandelion is. The shades of gray and lines, along with the complexity of the patterns attract me to this originally very drab photo of a dandelion. To make this more exciting I cropped the image and re-sized it. Then I converted it to the gray-scale, adjusting the curves and brightness-contrast until the tones were as vivid as I could get without degrading the image.

18 thoughts on “Soft and Intricate”